The North American O-47 was a US observation aircraft which began entering service with USAAC and National Guard units in 1937.  While the concept of dedicated observation aircraft was in vogue with most air forces around the world, experience revealed the type’s inherent vulnerability to interception and therefore the O-47 was obsolete even before it entered service.  Fighter aircraft with higher speed or bombers with better altitude performance could be easily fitted with cameras for the photo-reconnaissance role, and light aircraft such as the Piper L-4 and Stinson L-5 better performed the liaison and artillery spotting missions.

248 O-47s were produced, many of which were assigned directly to National Guard units.  By the time WWII began they had generally been assigned to second-line duties, most of those on strength with units in the Philippines were quickly destroyed.  During the war they were used mainly for ASW patrol and training.

Four examples survive today.  One is on display at the NMUSAF in Dayton, Ohio and another is in storage for NASM in Maryland.  One is owned privately in Minnesota.  The Planes of Fame Museum in Chino California is using two airframes to restore another.

For those wanting to complete a collection or just wanting to model something different there is hope, O-47 kits in 1/72 scale have been produced by two manufacturers.  Merlin produced a kit which is (perhaps fortunately) hard to find today.  I have never seen this one but by all accounts it is a difficult build.  AML produce two kits of the O-47, one with floats and one without.  This is reportedly a mixed bag with some nice molding and some features requiring correction.  No decals or aftermarket is available.

One thought on “North American O-47” 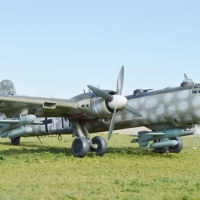