By Henry Saikaida and Koji Takaki

Published by Classic Publications May 2003

During the last year of the Pacific War, the Imperial Japanese Navy formed the 343rd Naval Air Group under Captain Minoru Genda.  The intention was to build a unit capable of standing up to American aviation units on equal terms.  The unit fought in tactical formations built upon two- and four-plane sections, abandoning the three-plane formations long favored in the IJN.  They were equipped with three squadrons of the outstanding Kawanishi N1K2 Shiden Kai (“George” to the Americans) and a section of Nakajima C6N Saiun (“Myrt”) reconnaissance aircraft.  Many of the best surviving fighter pilots in the IJN were assigned to the unit, making it a squadron of aces.

It is rare to find accounts of air combat in the Pacific from the Japanese perspective, but this book goes into specifics of each encounter the 343rd had and their outcomes.  The authors make extensive use of records and first-hand accounts for both sides, and sift through the conflicting claims to establish the actual results of each engagement.  It is apparent that the pilots of the 343rd were comparable to their American counterparts.  They went up against Corsairs, Hellcats, Mustangs, and Thunderbolts, as well as several patrol and bomber types.  While the 343 Kōkūtai generally gave as good as they got, they were eventually ground down by constant combat and losses they could not replace.

This is a unique book, and a very interesting read for students of Japanese aviation in the Pacific War.  There is plenty there for the modeler as well, with ten excellent Tom Tullis color profiles and ample photographs throughout.  There is also a short but excellent appendix which gives specifics on the colors and markings carried by the Shiden Kais of the 343 Kōkūtai.  This is becoming a collector’s book, so pick up a copy if you can find it! 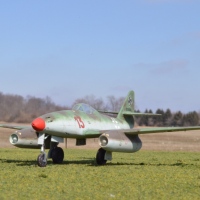